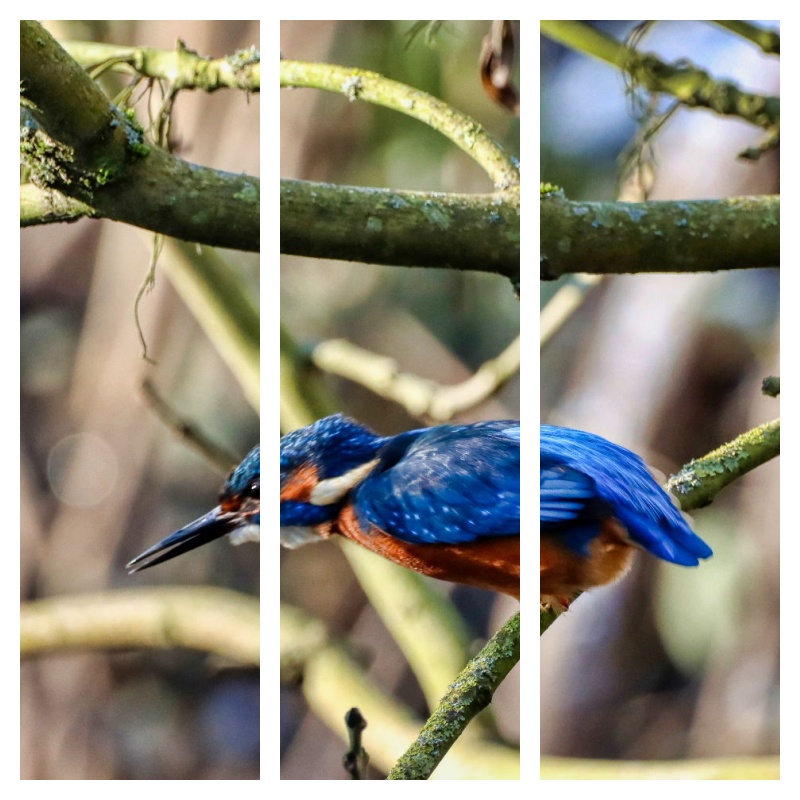 I have heard of an old folk tradition in Britain that says if a dead kingfisher is hung by a thread from a post it will always have its beak pointing in the direction of the prevailing wind.

Now I have to be honest and say that thankfully, not only have I not seen a dead kingfisher I certainly haven’t seen one strung up, (nor do I want to) and so have no way at all of being able to validate that old folk tradition one way or the other.

Putting folklore aside – the kingfisher is one of those birds that easily makes the ‘favourite birds list’ of my wife and I.

It’s magical to catch a glimpse of a kingfisher flying at speed low over water, and although it will normally fly low it’s not averse to flying higher if it needs to take a shortcut.

Where can I find the kingfisher

The kingfisher tends to like slow moving rivers, streams and lakes and can also sometimes be spotted along the canal network.

It’s hard to mistake the kingfisher as it streaks past. The brightness of its blue back really is unmistakable and if you do see one darting along the river you may just get lucky and see it land and perch on a branch a few feet above the water to fish. The kingfisher enjoys fish as part of its diet, typically eating minnows, sticklebacks and so on, but also feeds on some aquatic insects such as mayflies, water beetles etc.

You can read more about the kingfisher in one of my earlier posts at this link.

Did you know that the feathers of a kingfisher feathers contain no blue pigment at all and they are actually brown. The reason that they look blue is because of what happens when the light hits them.  Due to the way their feathers are structured it is only the blue and violet colours that are reflected back to our eyes.

The kingfishers is a resident in the UK all year round.  If the winter is especially harsh they may move to coastal areas but it would be unusual for them to travel much further than that.

Did you know the feathers moult between July and November and the main flight feather take about 90 – 100 days to moult and grow.

Kingfishers pair in February or March with the first clutches (of normally 5 -7 eggs) being laid in early April.

British and Irish kingfishers tend not to move very far unless tough weather conditions force them to move.

The kingfisher population in europe has declined since the 1970’s- largely due to river pollution. The bird is listed as Amber status on the Birds of Conservation Concern list.

Clicking on any of the pictures below should open a gallery that you can scroll though – I’ll update the gallery and re-publish this post as and when I add more pictures of this delightful bird.

Mrs Burns looking for the kingfisher