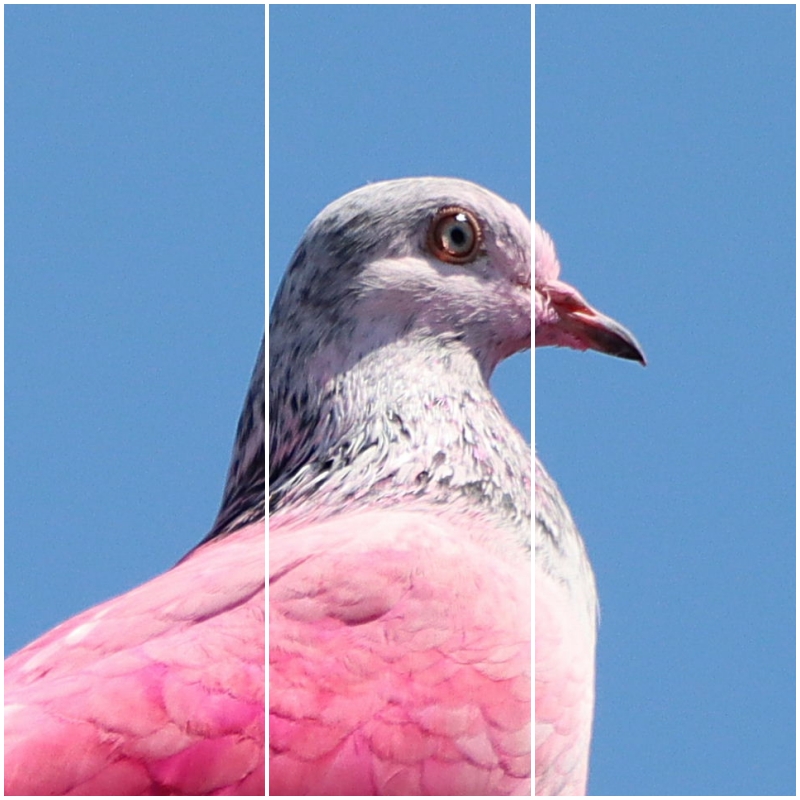 Pink pigeon – it’s not everyday you see one of these

I was sat at home chatting to my wife and nephew when I thought I saw a pink bird fly past the window.

It’s true it really is pink

A quick dash to the window to confirm that I really had seen what I thought I had seen then led to both my wife and I scrambling for our cameras as the bird flew off into the distance. As it turned out we didn’t actually need to rush because it circled for a while and then settled on a nearby telegraph pole.

Well actually … having gone all of my life, until the other day and never seen a pink pigeon, I was content to accept it as a most unusual ‘one off’ event, but the truth is, it returned at around the same time the following day and took up its perch on the same telegraph pole. I’ll update this blog post if it returns again.

What the story then?

Well I’m not so sure really. There is a pink pigeon that is native to Mauritius and you can read about that here – but that wasn’t what was flying near us or that is captured in the picture gallery below. Additionally there is a story at this link about sightings of pink pigeons in the UK in 2015.

As nice as it might be to think there is some new species of pigeon it seem the most likely (and sad) truth is that for one reason or another this pigeon and maybe others have been dyed. The story at the previous link seems to verify that was the case back in 2015. So although it’s true to say it was pretty interesting to see a pink bird it’s also true to say that if it is the case it has been dyed it’s hard to describe how incredibly disappointing it is that someone would do that to one (or more) birds.

Clicking on any of the images below will open a photo gallery that you can click or scroll through.

Lovely pics – I hope it lands in our garden.

GOOD PHOTOS TONY ,THEY ALL ARE JUST SEEN THE PIDGEON MYSELF WHEN SAT IN THE GARDEN,

Author
Tony B
Reply to  Anonymous