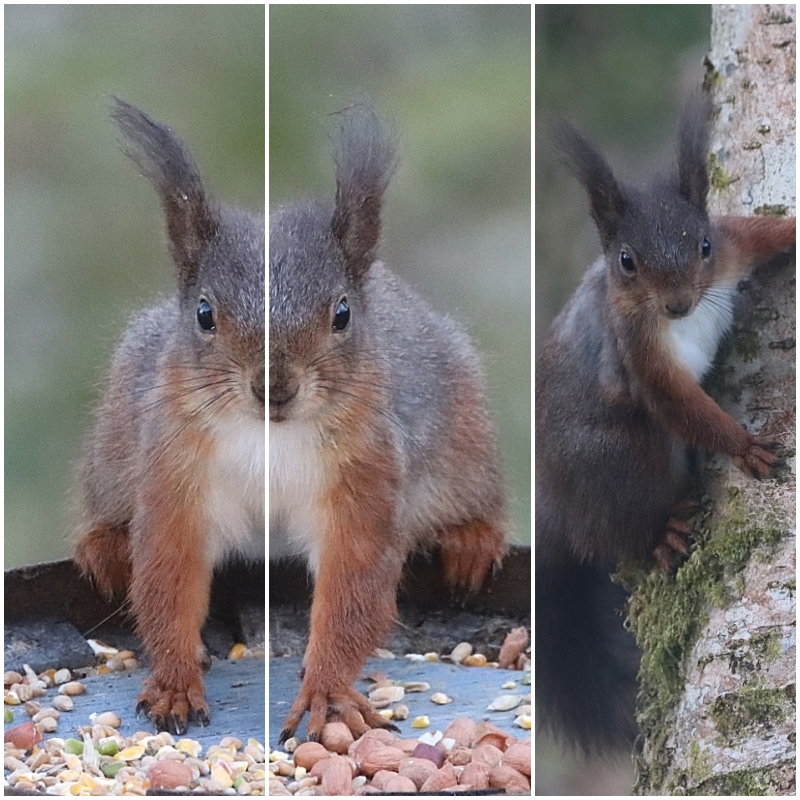 I posted previously about a recent trip to Scotland and some time spent in St Catherines in Argyll and Bute. We stayed in a pretty isolated cottage nestled in an area of protected forest and close to the shore of Loch Fyne.

We had stayed there back in September of last year and during that stay had a single solitary sighting of a red squirrel  and although hopeful of seeing red squirrels on this trip it was a hope born of optimism rather than experience.

There are just two different types of squirrel in the UK, red and grey. Whilst the grey squirrel is plentiful with a population of some 2.5 million the red squirrel is a much rarer site and it’s estimated that there are just 140,000 or so red squirrels and that’s despite them having lived in the UK for 10,000 years of so and being our native squirrel.

The grey squirrel didn’t come along until some time in the 1800’s when the Victorians introduced them from North America and there are stories of them escaping and establishing a wild population. Unfortunately grey squirrels carry a disease/virus that can often kill red squirrels.

I think it was on the second day of our stay that my wife has spotted a red squirrel who by the sound of it was started to see her as she was to see him. Despite bing startled she managed to get some decent pictures and we felt quite optimistic that we would get some more sightings of the elusive red squirrel. As it happened, despite wandering around through the forest and despite hanging around where my wife had first seen the red squirrel we went a few days with no sightings at all, that was until on one occasion as we were driving down the unmade road we saw one run across the road in front of us and scamper up a tree before pausing for a few moments to look back and stare at us. But despite trying he was gone before we could even grab a picture with a phone let alone swing a camera into position.

I didn’t quite share my wife’s confidence that we would see a re squirrel again before we left for home. It turned out that I just couldn’t have been more mistaken. We stopped at a local garage on the off chance they would sell seed so as we could top up the bird feeders that hung off a tree directly outside our cottage. Not only did the garage stock made up bags of bird feed they also sold bags of nuts which I bought.

Once back at the cottage I topped the feeders up, moved an old small barrel from near an outhouse and set out some nuts on that before heading in to make a coffee. I’m not quite sure how long it took but it certainly wasnt long before we had endless opportunities to photograph a couple of visiting red squirrels over the next few days.

We had gone from hoping but not expecting to see red squirrels to seeing them throughout the next three or four days and litterally being able to take as many pictures as we want! If you like red squirrels then you’ll almost certainly enjoy scrolling through the picture gallery below.