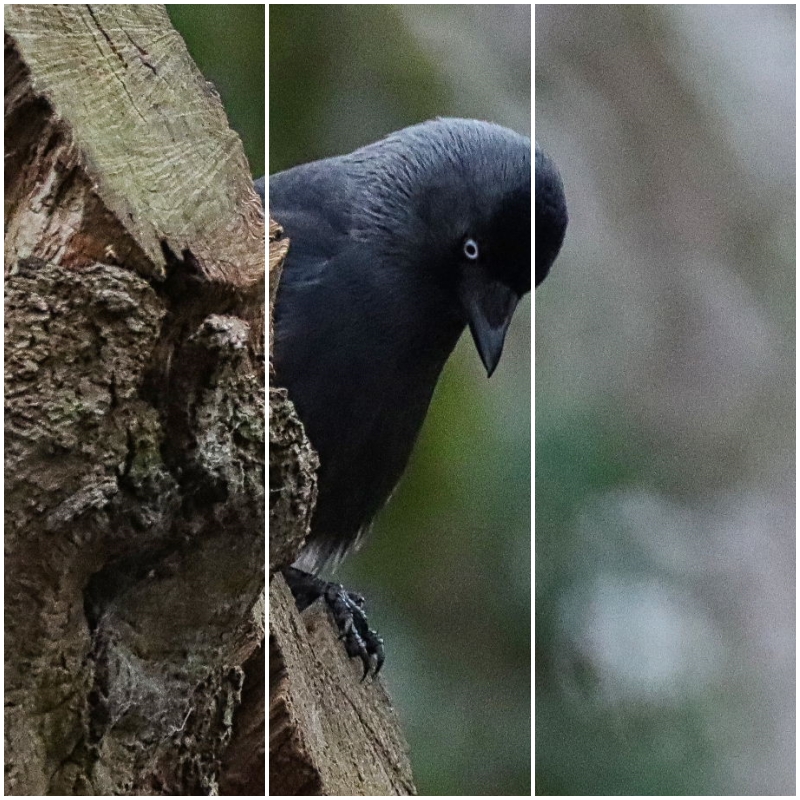 You shouldn’t be at all surprised if you see the jackdaw – a lovely small black crow.  With around 1.4 million pairs in the UK they could hardly be described as a rare bird, they really are quite common and you can pretty much expect to see them across the UK in fields, woods, parks and gardens.  Although the jackdaw is widespread across most of the UK they are not at all common in the Scottish Highlands

Although the jackdaw may not appear on everyones list of favourite birds I must admit that I quite like to see the jackdaws. I like the look of the distinctive sheen on the back of the head – it almost looks as though this small black crow has made an effort to look smart before going out for the day.

Jackdaws are actually the smallest of the crow family which in practice means they are smaller than ravens, rooks, magpies or jays and they are generally regarded as being quite a clever and intelligent bird. If you see them in your garden you shouldn’t be surprised if you see them trying to figure out the best way to access your bird feeder.

Where do they nest?

You could pretty much find them anywhere really. They tend to nest using cavities  – that could be a hole in a tree, cavities in cliffs, old buildings and chimneys – the key thing beng that the nest is sheltered.

Nests are typically made using sticks for the outside of the nest structure and then the inside is lined with wool or hair.

Jackdaw eggs are pale blue or blue-green and they are normally covered with dark speckles. A typical clutch is four or five eggs, and interestingly they don’t all hatch at the same time.

Breeding season for jackdaws is between April and July – with an incubation period for the eggs of 20 days and the new chicks flying around the 32 day mark,  the best/most likely time to see the young jackdaws will be in the first part of June.

A poem by William Cowper

There is a bird who, by his coat
And by the hoarseness of his note,
Might be supposed a crow;
A great frequenter of the church,
Where, bishop-like, he finds a perch,
And dormitory too.

Above the steeple shines a plate,
That turns and turns, to indicate
From what point blows the weather.
Look up — your brains begin to swim,
‘Tis in the clouds — that pleases him,
He chooses it the rather.

Fond of the speculative height,
Thither he wings his airy flight,
And thence securely sees
The bustle and the rareeshow,
That occupy mankind below,
Secure and at his ease.

You think, no doubt, he sits and muses
On future broken bones and bruises,
If he should chance to fall.
No; not a single thought like that
Employs his philosophic pate,
Or troubles it at all.

He sees that this great roundabout,
The world, with all its motley rout,
Church, army, physic, law,
Its customs and its businesses,
Is no concern at all of his,
And says — what says he? — Caw.

Thrice happy bird! I too have seen
Much of the vanities of men;
And, sick of having seen ’em,
Would cheerfully these limbs resign
For such a pair of wings as thine
And such a head between ’em.