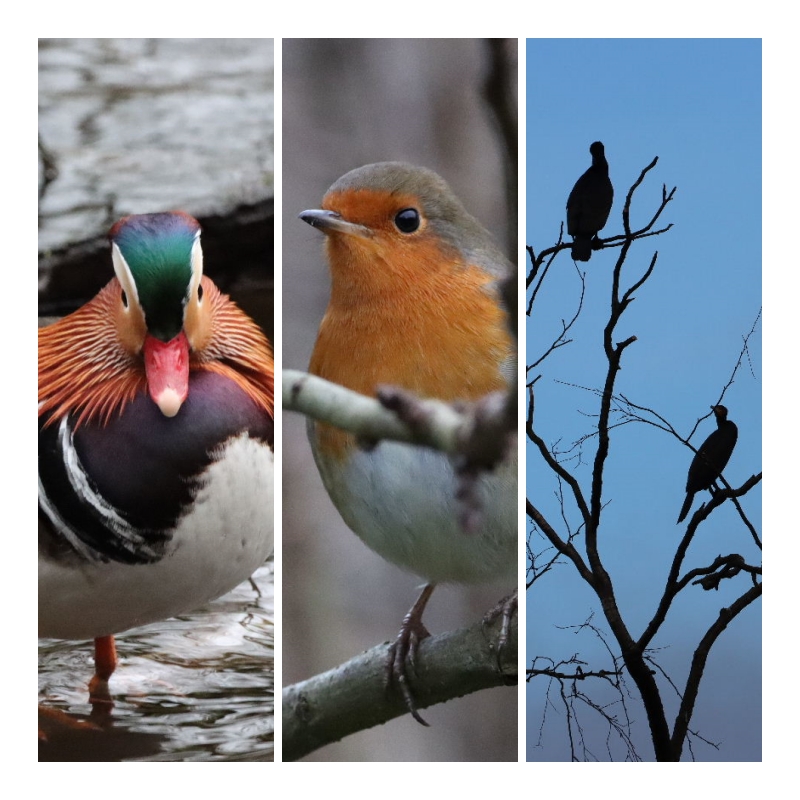 I suppose the title of this blog post is a little unusual. The post follows a recent trip to a local haunt of ours –  Etherow County Park,  a nature reserve close to home and a place I most recently wrote about in November. You can read that post here.

As I’ve written about Etherow Park before, this is just an opportunity to post new pictures of mandarins, robins and silhouettes in trees. Once you realise what the content is, then it’s not too much of a stretch to realise why I chose the title!

There are three separate photo sets in this post. They feature the Mandarin Duck, the Robin redbreast and The Silhouette in the tree, scroll on down to check them out … oh and the human in each of the photo sets is my wife.

The male mandarin duck is a far more colourful and eye-catching bird than his female counterpart. The colours of the plumage are elaborate and distinctive, and in truth, the female mandarin is really quite dull by comparison. Whilst the male has very distinctive orange colouring on his face, back and flanks his partner lacks the dashing and eye catching orange and has a grey head a white stripe behind the eye and flanks that are brown and mottled.

Originally introduced to this country from China they have become well established following escape from captivity. The natural breeding home of the mandarin duck is eastern Siberia, Japan, China, and parts of North Korea – and there are thought to be some 7,000 or so in England. A scroll through the photo gallery below will show just how pretty and colourful this bird is.

As the robin is one of the most popular British birds and a personal favourite of mine, it doesn’t take long to convince me to post a few pictures from any of trips out, including these from our Etherow Park visit

The silhouette in the tree

As we were heading back towards the car park and a hot drink to take out from the cafe I glanced across the lake and noticed sat high up in the tree four cormorants beautifully silhouetted against the early morning sky. When you look at the pictures in the photo set below it might seem an odd thing to say, but they would have been easy to miss – it’s was pretty much a case of when you’ve seen them you think how did I almost miss them – I suppose its that thing about sometimes things can get missed that really are in plain sight.

The cormorant is a pretty big bird and they make for a terrific sight, especially when you see them standing quite still with their wings stretched out to dry – that and their long neck make for quite a picture. They are pretty common in the UK with around 9,000 pairs and the numbers swell during the winter to around 41,000 or so.

You can see some pictures, some of which feature a cormorant drying his wings at this link which covers a summer visit to Reddish Vale County park. Check out the silhouetted cormorants in the photo set below.