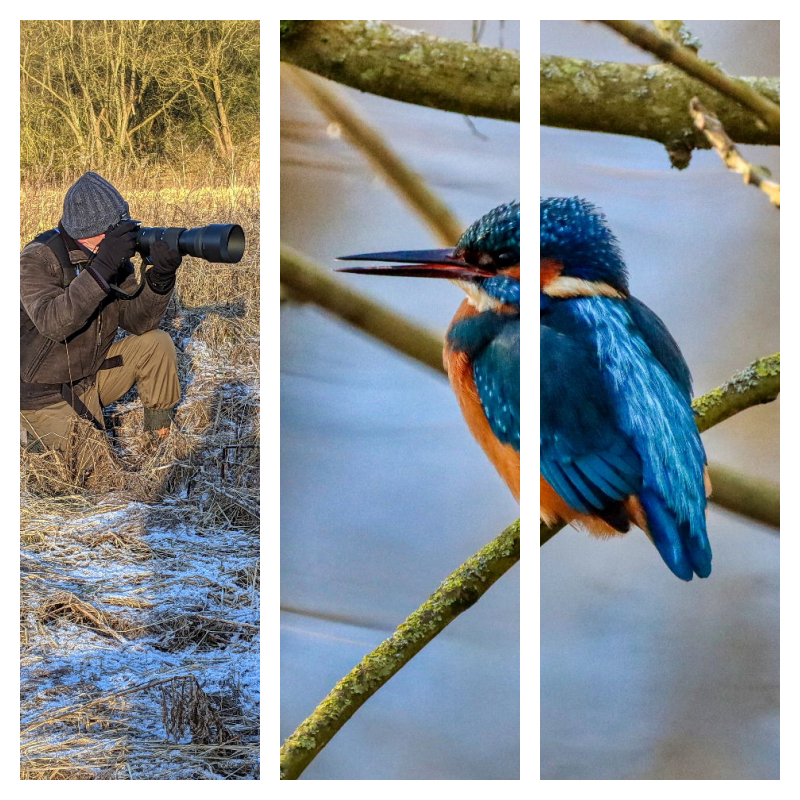 The last time I wrote about a trip to Reddish Vale was about six months ago – back in the summer of 2020. The contrast in the weather between the two visits couldn’t really have been greater. In August it was hot… on this visit it was below freezing.  The bitterly cold weather didn’t detract at all from the visit, in fact it made for a lovely walk across crisp and frozen white topped fields towards the river and then on towards Reddish Vale.

The country park itself is a decent size and covers about 160 hectares alongside the River Tame. It’s an area connected by a green corridor that links Denton in Tameside and Woodley in Stockport. Walkers, cyclists and horse riders are covered with paths and bridleways providing links to the Goyt Etherow, Saddleworth and Longdendale trails.

It seems there is always something to see on a visit to Reddish Vale – on the sand banks kingfishers and sand martins nest and the ponds and marshy wetland areas are home to geese, herons, grebes, cormorants, coots and not surprisingly a number of different types of  ducks.

Despite there being over a 100 species in the kingfisher family most of them are to be found in the tropics. Here in the UK the kingfisher to be seen is the common or Eurasian kingfisher. It’s relatively small with a blue upper body, orange under body and a long bill and lives on a diet of mainly fish. In comon with other kingfishers the Eurasian kingfisher has a large head, short legs and a stubby tail.

It tends to live near slow-moving, shallow rivers or streams which must be clean enough to provide a plentiful supply of small fish.  Branches that overhang shallow waters make for an ideal fishing perch.  Although the kingfisher will eat mainly small fish, such as minnows and sticklebacks, they will also eat insects, freshwater shrimps and tadpoles.

Some quick research indicates that their preference is for fish about 23mm long but they can actually eat fish up to 80cm long!  When the kingfisher is on it’s perch and has been able to identify a fish to ‘target’ it is able to work out its depth and then dive in for it  – just as it enters the water the beak is opened and the eyes closed by the third eyelid – so at the point at which it catches the fish it is effectively blindfolded.

With it’s target caught the kingfisher will return to the perch it dived off and will typically strike the fish against the perch several times to kill it. This is so the spines in the fins of fish like sticklebacks will relax so it is able to be swallowed head first.

Looking for the kingfisher

For some time my wife and I have wanted to photograph the kingfisher and it really has proved something of an elusive bird for us to spot and photograph. Fortunately our trip to Reddish Vale was rewarded with us finding one of these birds perched a few feet above a ‘backwater’ off the river and in between him diving into the water to catch fish we were able to take pictures and you will find some of these included in the picture gallery below.

It’s not all a happy story

Kingfishers don’t live long in fact it’s believed that only about a half of the fledglings – the time between hatching and being able to fly – survive more than a couple of weeks.

Only around 25% will survive to breed the following year and sadly very few birds survive longer than one breeding season, I understand that the oldest bird on record was just 7.5 years old.

The majority of kingfishers die of cold. A severe winter or lack of suitable food can kill high numbers of the birds and a bad winter can mean that it takes many years for the population to recover. It’s not just the winter weather that can be a problem. A cold summer or flooding  can make it difficult to fish which in turn can lead to  starvation of the brood or the loss of nests respectively.

They are also a species of bird that are very  vulnerable to the build-up of chemicals – in locations where there is industrial pollution and contamination by agricultural run, the fish that the birds rely on can be killed which in practice ruins stretches of the river that under other circumstances would be suitable places to live.

The following section (in italics) on the issue of disturbing of nesting locations is as important as it is sad and is copied and pasted from the excellent RSPB website:

Human disturbance of nesting birds is a serious problem, since the broods fail if something upsets the feeding routine. If human presence close to a nest prevents these shy birds from entering the nest for too long, the chicks may weaken enough (either from cold or hunger) to stop calling. This makes the parents wrongly assume that they are well fed and will not feed them. As a result, the chicks will perish. Heavy machinery that grades the banks and drains the land destroys many nests each year on lowland rivers. Persecution by fishermen and to provide feathers for fishing flies and to satisfy fashion trends seem to be well in the past.

Looking for the kingfisher