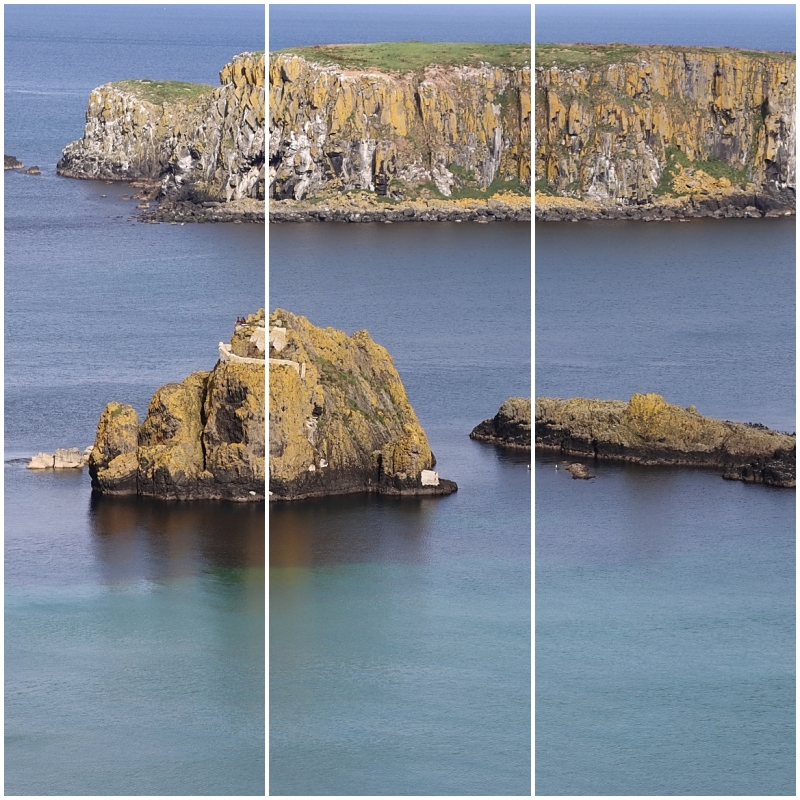 In Part 1 of this Blog I wrote about our stay in Larne in Northern Ireland and some of the terrific places we visited. If you missed reading about our time there, clicking here will take you directly to Part 1.

We had spent three nights at wonderful accommodation in Larne at McCareys Loanen Holiday Home. and in some respects we were a little sorry to leave. There really is so much to see and do in that part of Ireland, staying longer wouldn’t have been a chore. The second part of our trip took us to a delightful comfortable and cosy cottage in Lisnabert in County Donegal.

We had no plans to make a direct route

If we had made a direct route from Larne to Lisnabert it would have involved a drive of just 95 miles or so. However we had no plans to go direct and decided that on the way to our accommodation we would drive along the Antrim Coast and stop at one or two planned places as well as just seeing what the day might bring.

We had one last wander around the garden before we headed off in the general direction of the coastal road and the route to Giants Causeway. I’ve included a couple of pictures below of the garden at our accommodation in Larne. It looked like it would have made an ideal spot in the summer to sit outside and watch the sun go down. The timing of our trip wasn’t quite right for that sort of end to a day … perhaps another time?

We were on the coastal road in no time at all, heading out past the Carfunnock County Park  we had visited and walked around on the evening we arrived and then along the coast past Ballygally and a stop and wander at the small but pleasant Glenarm Marina.

Clicking on any of the images below will open a picture gallery that can be clicked or scrolled through. Read on for our stop at the Carrick-a-Rede rope bridge (it follows the Glenarm picture gallery)

The fact we could accommodate a visit to the bridge and Giants Causeway was a bonus as was the fact that we discovered it is looked after and maintained by the National Trust. Being members meant we were able to access it without additional payment, there’s a £13.00 charge for none Trust members.

We used the quick and easy online booking facility to reserve a time slot and the booking also took care of car parking as well. If you are planning to visit, it’s worth bearing in mind that the bridge closes if the weather conditions make it unsafe so you would want to check in advance.

The bridge itself is connected to the rock face of the cliffs and spans a stretch of the Atlantic Ocean to the (very) small island of Carrick-a-Rede. There is only one building on the island and it’s a fishermans cottage. The bridge itself is about 100 foot or so above the sea and although it’s not too long at about 65 foot long it felt like it was quite long enough!

The bridge has an interesting history and has been there in one guise or another for some 350 years having first been built by salmon fishermen, There is plenty more information (and it’s an interesting read) at this Wikipedia page.

The harbour is in the village of Ballintoy and just off the B15 coast road. Even the little road that goes down to it is quite enchanting – a steep and winding road that requires a little care to safely navigate it.

The cafe at the harbour was closed when we were there (I suspect it was an out of season thing) but who needs a cafe when a visual feast like this is laid before your eyes.

We didn’t actually call to the village but I understand there are a few shops and restaurants etc there as well as accommodation if you wanted to make this location a stop over.

I have never see the television series Game of Thrones but the harbour at Ballintoy was one of a number of locations used when filming the series. As such I gather it’s a ‘thing’ for fans of the series to visit this place.

In an ideal world we would have visited Giants Causeway early in the day – but the way we had worked things meant that wasn’t really an option for us. So our plan was to travel the eight miles or so from Ballintoy Harbour to Giants Causeway and visit in the afternoon.

We knew in advance that the time we were visiting meant it unlikely we would have the place to ourselves. The picture below of Pat at Giants Causeway is one of my favourite pictures from our trip

Inevitably Giants Causeway was pretty busy when we got there. Tour buses drop folk off at the bottom of the road that leads to the visitor centre and there were probably three or four buses there as we arrived. Like the rope bridge at Carrick-a-Rede this is another place that is managed and run by the National Trust, so entry and parking was covered for us by our membership. If you do visit and don’t go via the visitor centre access to the Causeway is free of charge.

We got some reasonable photo’s

Once we walked out to the ‘end’ of the columns that jut into the sea it wasn’t too busy and we were able to get some decent photo’s during our time there.

Giant’s Causeway itself is made up of about 40,000 interlocking basalt columns due to volcanic activity and it has been a recognised World Heritage Site  since1986. The Wikipedia entry says that in 2015 a poll of Radio Times readers named it as the fourth greatest natural wonder in the UK!

It’s certainly a popular place and there were almost a million visitors in 2015 and we would certainly recommend visiting if you get the chance, although we would say get there early if at all possible.

I won’t write more here as there is plenty of information on the web, the Wikipedia entry and the National Trust entry are good starting points for further reading.

Our last stop of the day before heading to our accommodation was at another location used in the Game of Thrones television series. As I said earlier it’s not a TV programme we have ever seen but I think we saw the place, called The Dark Hedges advertised in one of the leaflets we had picked up. As it was on our route we decided to call and check it out. We did make one brief stop before heading for The Dark Hedges and that was at Whiterocks Beach – but to be honest we didn’t stay too long as part of the beach was closed off due to a TV/Film crew working there.

The Dark Hedges are less than 13 miles from Giants Causeway. From the Dark Hedges to our accommodation was about 65 miles or so, which made it a bit of a no brainer to call and see what it was like.

The backdrop to the story is that an avenue of beech trees was planted in the 18th century by the Stuart family. Apparently, and so the story goes it was designed to be a feature that would impress  visitors as they arrived at Gracehill House (their Georgian mansion) and I would imagine that it really did impress people.

A couple of hundred years later and the avenue of beech trees is still there and it really is quite impressive. Some quick research on the Internet shows that this avenue of trees has become one of the most photographed natural items in Northern Ireland.

As I wrote earlier this location was used in the Game of Thrones TV programme and I understand it was used to represent something called the Kingsroad.

I suspect as well that a little artistic licence was used to make the avenue look even more dramatic – I couldn’t resist having a little ‘mess about’ with some of my own pictures as well. I’m sure you will be able to work out those I edited.

The end of the day

After what had been a quite brilliant day we completed the last leg of our journey and arrived at our fairly isolated cottage in Lisnabert in County Donegal. Our accommodation was located a little under four miles from the small village of Raphoe in east Donegal, the village has a population of around a 1,000 or so.

A risk when booking

Whenever you book a property online you are typically reliant on the information and pictures that are set out. There can often be a risk that property owners or agents may have used a touch of ‘estate agent terminology’ and on occasions, offer a description that might be a little distance from the truth.

So in short, you don’t know until you get there what the property is really like. Our first property in Larne had been superb and it’s fair to say that our cottage here fully lived up to our expectations.

Carnowen Cottage is another property we would be very happy to recommend or stay in again if we were travelling this way.  It was in a quiet location and it really was lovely, very well equipped, with lots of nice touches and was warm and cosy. So the first two properties we stayed in had actually exceeded our expectations and we were really happy with our bookings.

The communications from Zuzana the property owner couldn’t have been clearer or more helpful – and in fact we accidently left an alarm clock when we left and Zuzana very kindly and generously posted it back to us at her own expense.

We booked this property via booking.com  Check out the picture gallery of this lovely cottage accommodation below.

Clicking any image will open a picture gallery that can be clicked or scrolled through.

Don’t forget to check the next post in this Holiday Ireland/Tour Ireland series. Part 3  has information about our trip to Derry, Fanad Head, Horn Head, Killybegs and more. The next part of this Blog set also answers the question of whether our accommodation was excellent in all three places or were we let down and disappointed when we travelled to Kenmare in County Kerry?

You can find and follow my accompanying instagram page for this Rainy City Photo blog here: rainycityphotos

Love these photo’s. A grreat advert for Ireland.

M67 bridge works. View from the other side#bridge#

M67 bridge works. Work has started to replace a lo