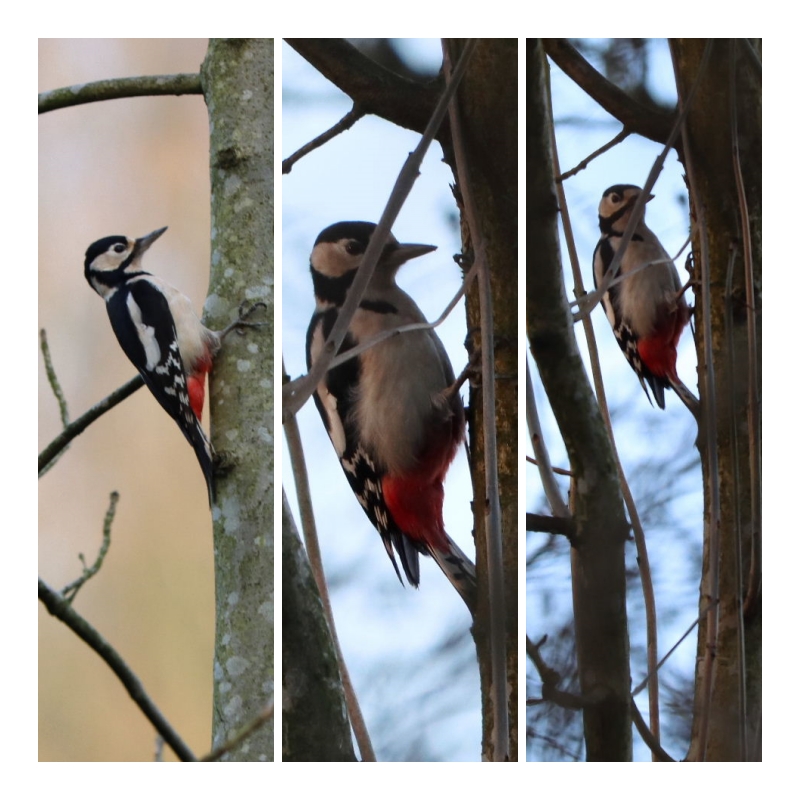 The Lesser Spotted is a declining species of woodpecker whilst the great spotted and the green are pretty common and can be found across the UK, although I understand that woodpeckers are not as abundant in the UK as in many parts of Europe.

Until a few days ago I had only heard the woodpecker – with that familiar and easy to identify sound as though drumming on wood. I had never actually seen one and certainly never been able to photograph one.

I wrote in a recent post how my wife and I have ‘local names’ for local places – so Horse Field, Fox Field, Drinkers Bridge, etc are all part of our daily language and quite simply based on the obvious … so the local field where we occasionally spot a fox, we refer to as Fox Field, the local field with horses we refer to as Horse Field.  We know that this naming convention perhaps lacks some imagination, but it works for us and with that in mind it shouldn’t be too difficult to work out why we now have somewhere called Woodpecker Gate in our daily lexicon.

A couple of walkers that my wife frequently chats to, told her of a location where there was a decent chance of seeing a woodpecker.

In due course, she called there and did indeed see a woodpecker. After passing that information onto me I made a point of stopping by on my next walk that way and would you believe it within just a minute or two of me arriving there I saw the handsome devil swoop down before flying off to perch in a nearby tree.

I was able to quickly grab a few pictures of him up in the tree, and then again when he flew down landed in a smaller and lower tree, paused a moment, and then was gone.

I was really pleased to have seen him, delighted to have got some pictures but just a little frustrated that I wasn’t in an ideal position to get better quality pictures on this occasion – although now I know of this location I am optimistic of more and better success in the future.

A little bit of research tells me that it’s the great spotted woodpecker that we are the most likely to see and that is a pretty common, medium-sized bird throughout the woodlands of the UK.

I gather he can even be a garden visitor and a frequent visitor to garden feeders (although from our perspective we can only say if only…). The other woodpeckers are seen on a much less frequent basis

I would say that by any measure the woodpecker is a lovely bird to look at, the scarlet red plumage on the underside of the woodpecker really does make him stand out and is in real contrast to the black and white of his feathers. It was brilliant seeing the woodpecker and I’ll be looking for him again and hoping to get some better photographs.